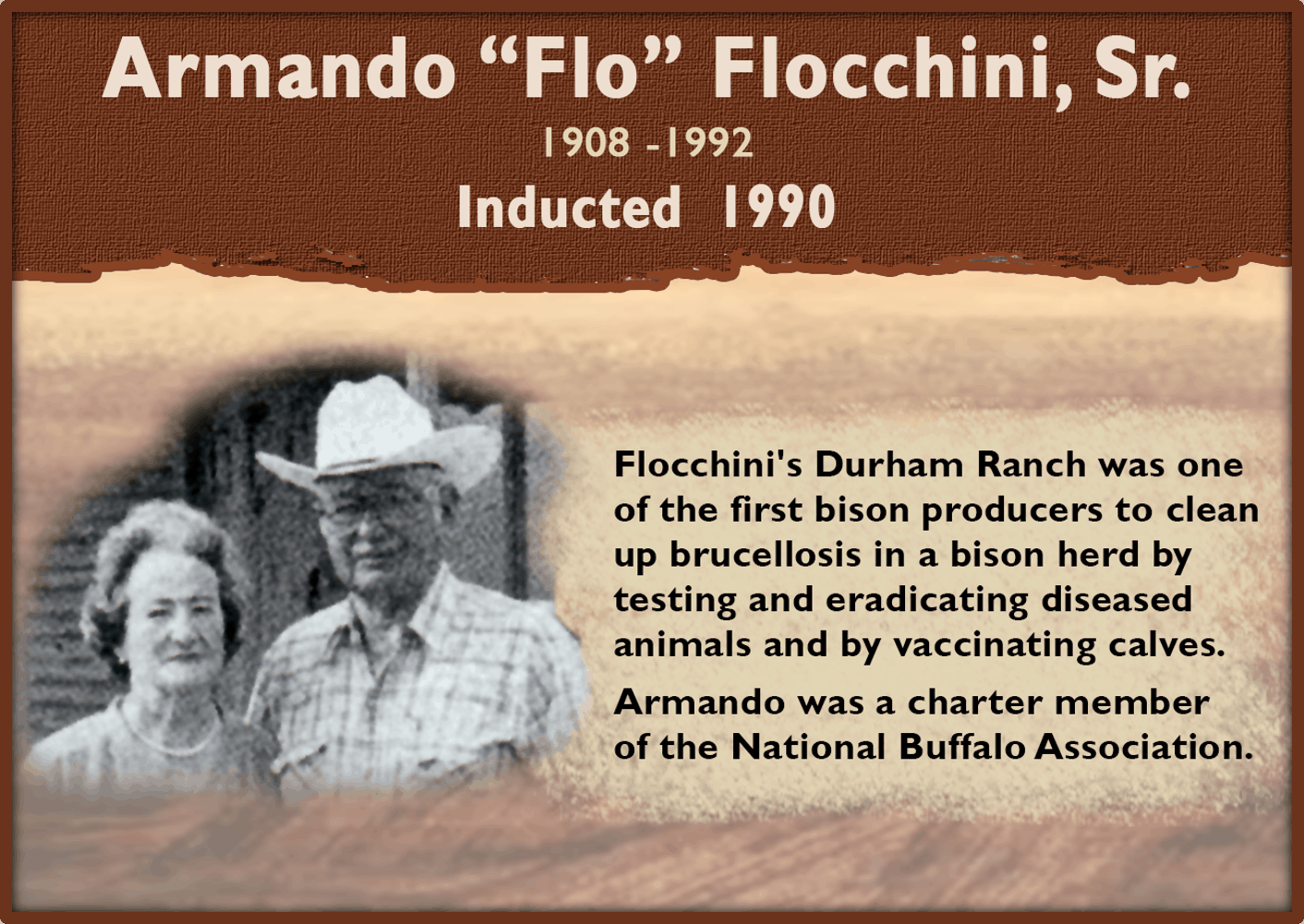 At the same time preservation efforts were underway for the American Plains Bison, 6-year-old Armando Flocchini (1908–1992) was
crossing the Atlantic to America. Born in France, little Armando lived in Italy until that voyage to America, settling with his family in San Francisco. His father helped rebuild the city after the 1906 earthquake.

The Flocchini family worked on dairy ranches throughout northern California after that, with Armando’s father John serving as a ranch hand, and mother Rose as a cook.

At one ranch near the Klamath River waterfalls, Armando had to travel five miles to school and cross the Klamath River by boat each day. Education in the early 1900s was as trying as the times were hard. Over a seven-year period Armando spent two years in the second grade, skipped grades four through seven and graduated from grade school at age 13.

Not wanting to attend high school, little “Flo,” as he was known to his friends, went to work in a lumber mill for $4.20 a day while studying auto mechanics through correspondence school. This upset a few teenagers who were jealous of his ambition, who reported him to a truant officer.

Rather than return to high school, Flocchini entered Eureka Business College at 14 years of age, graduating just six months later. Rejected by the business community due to his age, he returned to college where he taught a commercial business course. Average age of his students was 22.

After stints as a grocery store clerk and bank teller, Flocchini again took correspondence courses, this time to become a locomotive engineer. At 17, he went to work in a round house as an oiler. Once again his age hindered him, preventing him from becoming an engineer. Disgusted at having to wait to handle big locomotives, he returned to work as a dairy hand at a Brisbane farm, near San Francisco, manually milking 20 cows a day.

By his 20th birthday, tired of moving around, Flocchini wanted to learn a trade that allowed him to settle down. He applied at Grant Market in San Francisco where approximately 50 butchers were employed. When the manager learned of Armando’s ranch experience, he said to him, “Flo, why you’re just a regular cowboy! You’ll do fine.’ The nickname took, and Armando was called “Cowboy” for several years thereafter.

Flocchini stayed on at the market for three years as a calf skinner, working 10-hour days, six days a week, skinning as many as 150 calves a day for a weekly salary of 12 silver dollars.

In 1932, while employed at the California Hide Company, Flocchini bought into the Durham Meat Company located in San Francisco. Although it employed only four people—a bookkeeper, butcher, driver and helper—the venture cost Flocchini $5,000. Without asking for collateral, his boss loaned him the buy-in money.

In 1947 the business expanded with a beef boning operation in Mountain View, California, and subsequently to San Jose in 1956.

After graduating from the University of San Francisco with degrees in business administration, Flocchini’s sons joined the business as well, Armando Jr. “Bud” Flocchini in 1956 and Richard Flocchini in 1962. They continued working together ever since.

The company expanded into cattle feeding at Oakdale and Gonzales, California, in 1960, feeding up to 15,000 beef and cattle per year.

In 1966 the Durham Meat Co. was awarded the Quality Excellence Award. It was the first time the award was presented to a meat company.

In the spring of 1965 the Durham Meat Co. moved into Wyoming, purchasing land from the W.R. Wright for the B-Bar-B Buffalo Ranch, 35 miles south of Gilette. There were already 530 head of bison grazing on the pastures, opening up a whole new ranching experience that Flocchini and his sons discovered to be “unpredictable.”

The Durham Ranch was one of the first bison producers to clean up brucellosis in a bison herd by testing and eradicating diseased animals and by vaccinating calves, doing so without reimbursement from the government. Durham Ranch has had a certified-free herd since 1973.

END_OF_DOCUMENT_TOKEN_TO_BE_REPLACED