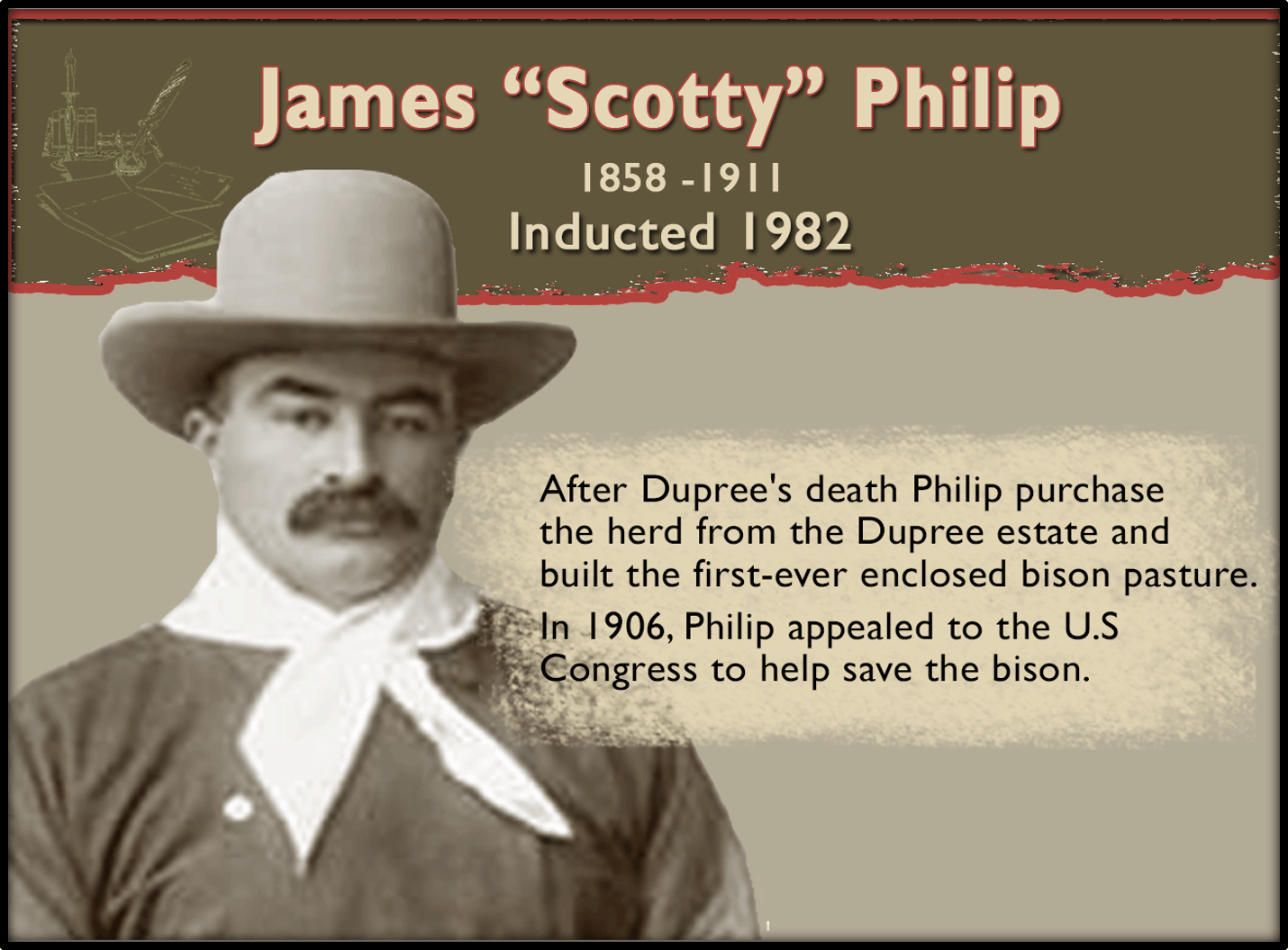 James “Scotty” Philip (1858–1911) is the Scottish-born American rancher and South Dakota politician remembered as the “man who saved the buffalo” due to his role in helping to preserve the American Bison from extinction.

Philip emigrated to the United States in 1874 at the age of 15, first settling in Victoria, Kansas, but moving shortly thereafter to the Dakota Territory to join the Black Hills gold rush. Unable to make a living from his mining efforts, he took on odd jobs enabling him to buy a few cows to begin ranching. Philip married Sarah Larribee. Since she was half Cheyenne, the Philips were given a plot of treaty-protected Native American land and allowed to graze the small herd on the fertile grasses of the reservation.

His concern for the America bison may have begun prior to his move to the Black Hills. In Kansas he had seen trainloads of bison hides in transport to tanneries and heard that hunting pressure had divided the once incomprehensibly expansive bison population into distinctly separate, dwindling herds. Later, while building his ranching empire, which at its peak comprised more than 40,000 head of cattle and employed 65 hands, he noted the lack of bison from what had traditionally been a bison-covered range. He became convinced he must try to save and preserve a prominent “symbol of the west.”

Philip had heard of Pete Dupree, who had managed to catch five buffalo calves during the last big hunt on the Grand River in 1881. When Dupree died in1899, Philip purchased the herd from the Dupree estate. Then he built the first-ever enclosed bison pasture along the Missouri River just north of the present day town of Fort Pierre. When it was completed in 1901, Philip and several of his ranch hands drove the Dupree herd, now grown to 74 head, 100 miles to the pasture.

In 1906, Philip appealed to the US Congress to help save the buffalo. Philip was permitted to lease 3,500 acres of unclaimed Government land to form what may be South Dakota’s first tourist attraction, the Buffalo Park.

Philip also worked with ranchers from Canada, North Dakota, Montana, Oklahoma and Texas as bison rescuers. Their collective effort acquiring small numbers of bison at a time is largely responsible for the preservation of the species.

Due to his hard work and determination, Philip had experienced relatively quick success as a rancher and in several entrepreneurial ventures. And he had formed numerous relationships of influence and power. He was a respected military scout and courier, an advisor and friend to four governors and several bank directors. He was co-founder and CEO of the first Missouri River Stockman’s Association. He was a personal friend of several Indian chiefs, including Crazy Horse and Red Cloud. He was a senator in the South Dakota State Legislature. He used this influence to become not only the benefactor of the American bison but also to gain fairer treatment of Native American peoples and to help his employees, neighbors and friends advance themselves.

Philip died suddenly on July 23, 1911. He was buried on a family cemetery near his buffalo pasture. The herd had grown to approximately a thousand head, the largest in the world at that time. Some of the bison came down from the hills as the funeral procession passed. Newspapers suggested the bison were “showing their respect to the man who had saved them.” Members of this herd were used later to stock national and state parks throughout the United States. Custer State Park, for instance, purchased 36 head from the Philip herd.

In addition to the Buffalo Hall of Fame, Philip is an inductee of the Hall of Great Westerners of the Cowboy Hall of Fame in Oklahoma City. Philip is also the namesake of Philip, South Dakota. The town’s webpage features a tribute to Philip.

Thanks to Lonis Wendt, Vivian, South Dakota, for sharing his historical review.