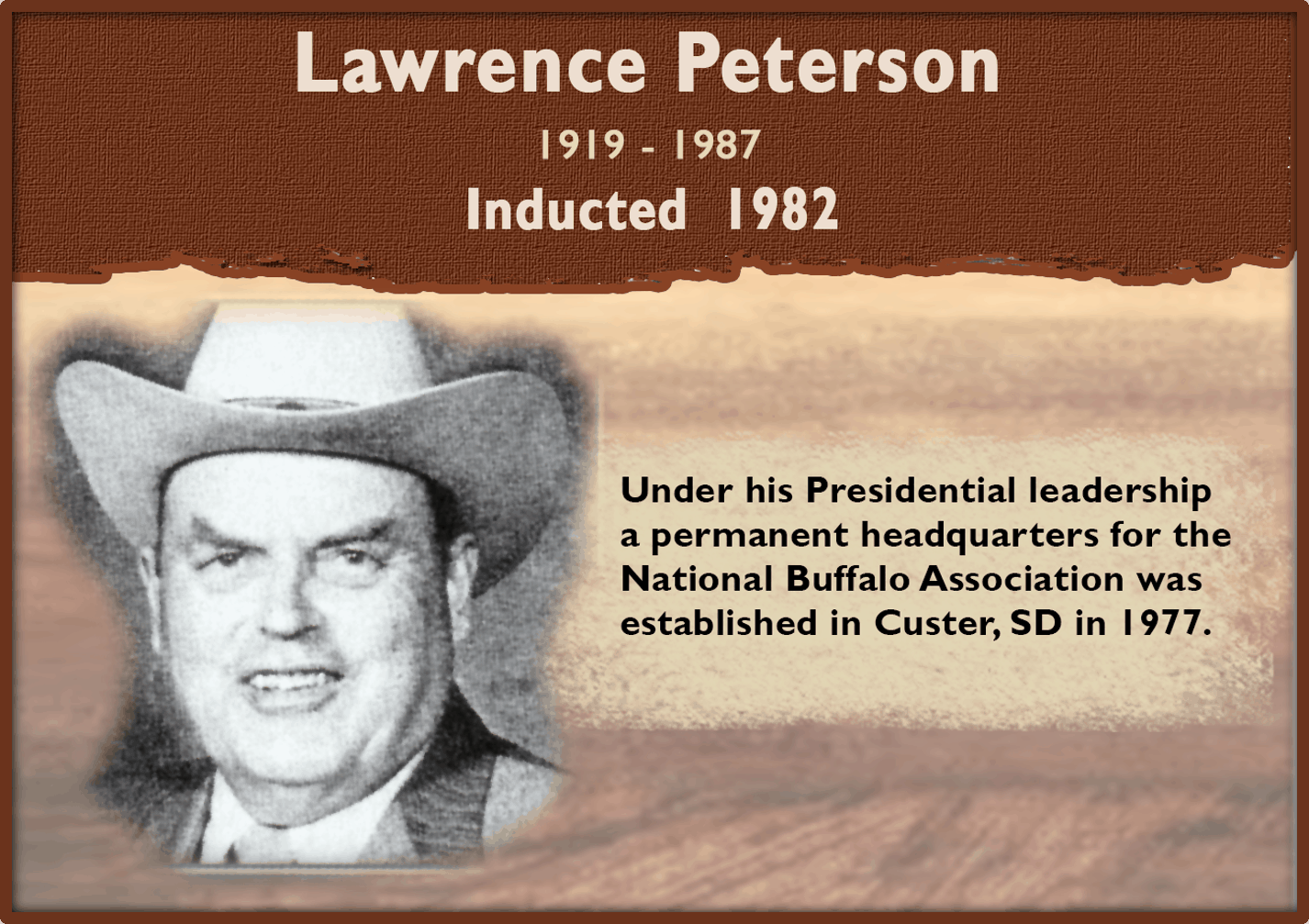 Lawrence A. Peterson (1919–1987), son of Earl J. Peterson, was born in Newport, Nebraska. He married Georgia Atkinson of Bassett in 1944. Lawrence and Georgia had one son and three daughters together.

Peterson began his association with bison as a teenager when his father purchased a few of the “shaggy critters” in the 1930s. In 1968 Peterson started his own herd with the purchase of three head from his father’s estate. He and his wife maintained a herd of about 50 head, marketing the excess animals off as breeding stock and meat.

Peterson joined the National Buffalo Association in 1973. He serving on the NBA Board of Directors and in 1976 served as vice president. In 1983 he was re-elected to the Board, serving as its president for two years. In 1987 Peterson retired his position on the Board. Georgia Peterson was elected to take the open seat at the March 1987 meeting.

When Peterson was elected in 1977, the NBA was still a small and struggling organization. Evaluating the problems and needs of the Association as it pertained to the needs of the bison industry, he chartered a new course. The first goal was a permanent NBA headquarters. This was established in Custer, South Dakota, six months after he took office, complete with fulltime coverage and a distinct NBA telephone listing.

Peterson’s second goal was to stabilize BUFFALO! magazine, placing it on a dependable printing schedule, contracting local services and assigning content and editorial duties to office staff. Published quarterly, BUFFALO! has been described as the “official voice of the National Buffalo Association” and as “a continual source of entertainment and information for the buffalo producer, historian, collector, nutritionist, outdoors person, teacher, school child, and public in general.”

His third goal was to create bylaw changes to meet the needs of a growing industry and to initiate new programs.

Through Peterson’s guidance and wisdom the Association grew from a headquarters with a part-time secretary/treasurer sharing office space to a fulltime executive director with staff owning its own building. This growth allowed the NBA to provide services that affected the growth of the bison production industry, providing its membership with a more stable organization to serve that industry.

Upon retiring as president, Peterson became affectionately known as Old Buffalo Out to Pasture. However, he remained actively involved with the organization and with the production and marketing of bison and bison products until his death in August 1987. Peterson was instrumental in introducing many people to the joys of raising bison and promoted the industry untiringly, whether at social gatherings or public bison sales.