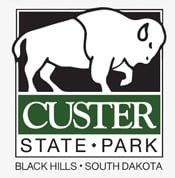 The National Buffalo Foundation is the proud sponsor of bison interpretive signage displayed throughout Custer State Park in South Dakota. Its interpretive programs are part of the exciting array of features that rank Custer State Park as one of the World’s Top Ten Wildlife Destinations. These include access to a wide variety of wildlife including its famous bison herds, as well as its scenic drives, historic sites, visitor centers, fishing lakes, resorts and campgrounds.

The park’s Peter Norbeck Educational Center is the main location of its educational programming efforts and is named for South Dakota’s first native-born governor and also three-term U.S. senator. The Center features interpretive exhibits and displays about the history of the area, from Black Hills geology to gold panning.

One of the nation’s largest state parks comprising over 71,000 acres, Custer State Park also hosts an annual buffalo roundup, the first step in preparing for the November Buffalo Auction, a herd management tool. Park personnel are joined by cowboys and cowgirls who drive the park’s herd of about 1,300 head thundering past event spectators into buffalo corrals. The auction ensures the herd does not exceed the park’s winter foraging capacity.