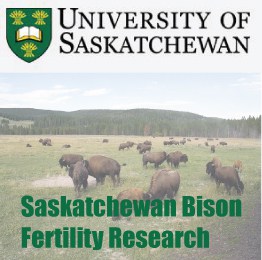 The North American bison (Bison bison) population has gone through many documented transitions in the last several hundred years. During the early 1800’s their numbers have been estimated at 30 million and even as high as 60 million (McHugh 1972). By the end of that century, due to hunting, their numbers plummeted to a few hundred, but bison population numbers have made a miraculous recovery through conservation efforts and commercial production.

In 2002, the bison population in North America was probably just under 500,000 animals. The number of bison residing on private Canadian farms in 2002 was estimated at 169,000 animals (Nixdorf 2003). A 2002 census done by the National Agricultural Statistics Service of the United States Department of Agriculture (USDA) estimated the bison population on private farms in the United States to be 231,950 animals (USDA 2002). As markets for bison products develop and expand these populations are expected to grow. The number of bison, both Plains- (Bison bison bison) and Wood bison (Bison bison athabascae), residing in public herds in Canada and the United States, is estimated to be 28,145 animals (Delaney 2003).

With the rapid expansion in bison populations and profitable markets for breeding stock there was relatively little interest in conducting research on bison whether it be nutrition, reproduction or animal health. There was no need for efficiency; however, in today’s market the commercial population is growing faster than the market demand. As a result the market price for live animals has dropped, and producers are now looking for ways to raise bison at lower costs.

Individuals such as Dale Lott, Joel Berger and Carol Cunningham, and Tom McHugh have dedicated much of their lives to the study of bison biology and the dynamics of their behaviour. Without these individuals our knowledge of bison would be almost non-existent. Now is the time to build on that knowledge and create a more detailed understanding of reproductive physiology in bison. This is the next step in helping both commercial producers and conservationists to achieve their objective of sustainable and profitable bison populations.

A committee made up of scientist and industry representatives, the Bison Research and Development Working Group (BRADWG), has developed a strategic research plan for the bison industry. This strategic plan identifies immediate and long-term research goals to aid in the development of the Alberta (and if appropriate, the Canadian) bison industry. Although there is little desire within the industry to over manipulate reproduction in bison, the need to understand basic reproductive function remains (Rutley 2003). Reproduction in bison, specifically male fertility, has been identified as a high-priority for both immediate and long-term consideration.

Research described in this thesis is an initial attempt to characterize reproduction in male bison. Biologists involved in conservation efforts are discovering that the lack of knowledge for reproductive physiology in bison is making their work very challenging. As commercial producers need to increase the efficiency of their bison farms/ranches, basic knowledge about reproductive physiology will help them make sound decisions affecting the economic viability of their operations.