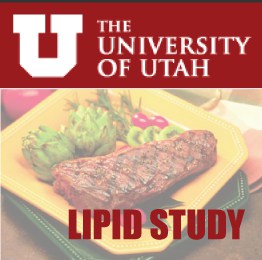 The National Buffalo Foundation contributed to a University of Utah nutritional study comparing bison lipid (the major component of fat) to other dietary lipid sources in regard to chronic human diseases. The study was conducted by Professor Wayne Askew for the Division of Nutrition, College of Health, Health Sciences, University of Utah, Salt Lake City.

​Askew’s study concludes, “It is tempting to speculate that Bison meat, by virtue of its inherent leanness and unique fatty acid profile, may prove to be a potentially ‘therapeutic’ component of a healthy diet.” Bison’s unique fat profile makes it a superior meat selection in preventing chronic diseases of the cardiovascular system, and also possesses anti-carcinogenic properties.

​Bison consumption in the United States has increased in popularity both due to taste and leanness and is now a commercially available alternative to cattle beef in many grocery locations. According to the National Bison Association, the total number of Bison in the US has increased from a low of 1,500 in the mid-1800s to the current estimate of 400,000 today. Bison meat products are becoming mainstream food items in many health conscious American households. Approximately 35, 000 Bison were commercially processed for meat in 2005, a 17% increase over 2004. While still a small percentage of total cattle beef sales, Bison meat provides a healthy alternative for consumers of red meat.

Dietary fat, once vilified by one and all, is now regarded as having some potentially healthful properties. We now know that the fat content of the food we consume can be beneficial or harmful depending upon the type of fat the food product contains, particularly the individual fatty acids attached to the triglyceride molecule. Triglycerides are the major form of storage fat in muscle tissue and are deposited in the muscle cell as well as the more obvious external marbling around the meat. The total amount of fat consumed in our daily diet is an important determinant of blood lipid levels; however certain types of fat are less “atherogenic” or not as prone to cause cardiovascular disease as others. Ideally, we would like to consume fats that are less likely to promote high blood cholesterol levels and less likely to be subsequently deposited in arterial plaques that lead to poor cardiovascular health. Generally speaking, saturated fats such as palmitic acid (C-16) are considered more atherogenic than poly-unsaturated fatty acids. Certain C-18 and C-20 polyunsaturated fatty acids are structured to contain their double bonds in a particular order with respect to the position of the first double bond and the positioning of hydrogen atoms around the double bond; this structuring imparts some unique health benefits to these fatty acids. Fatty acids that start expressing their double bonds 3 carbons from the methyl end of the fatty acid (omega 3 fatty acids) are usually not nearly as atherogenic as those which start their double bonds 6 carbons from the methyl end of the fatty acid molecule (omega 6 fatty acids).